photos and comments courtesy of

Santiago (also spelled São Tiago or Sant'Iago) is the biggest island of the archipelago. It was the first to be discovered by the Portuguese navigators, in the 15th century. It was the first to be settled (followed by Fogo). It has more than half of the population in the archipelago. Santiago is also dry, but its hinterland has big mountains and some humidity that allows some farming. 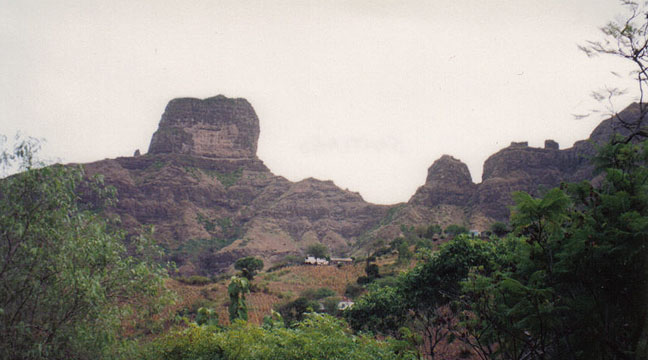 Santiago Island.  Mountains of the interior. 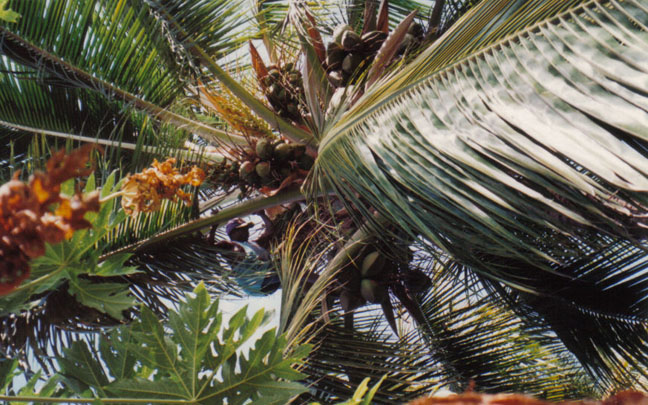 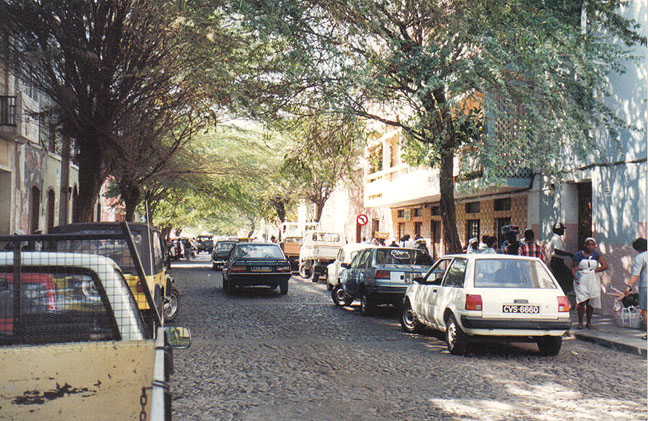 Praia city, Santiago Island.
Praia, or Cidade da Praia ("city of beach"), is the capital of Cape Verde.
A main street of downtown, which is on the top of a plateau, known precisely as Platô.

The bay and beach of Tarrafal, in on the northern tip of Santiago Island.
The little houses are part of a tourist resort, which is relatively well integrated in the landscape. 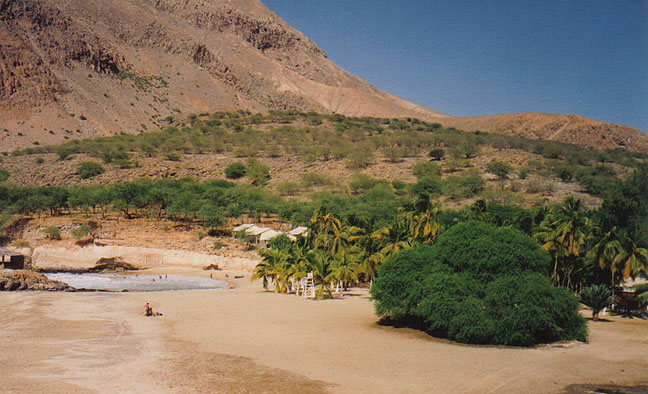 Despite the beauty of its beach, Tarrafal is infamous due to its former Concentration Camp.

Even today the word "tarrafal" is used to mean something very bad and horrible.
The hell of the Tarrafal concentration camp ended in 1974, after the April 25 revolution in Portugal,
that led to the end of the colonial war. 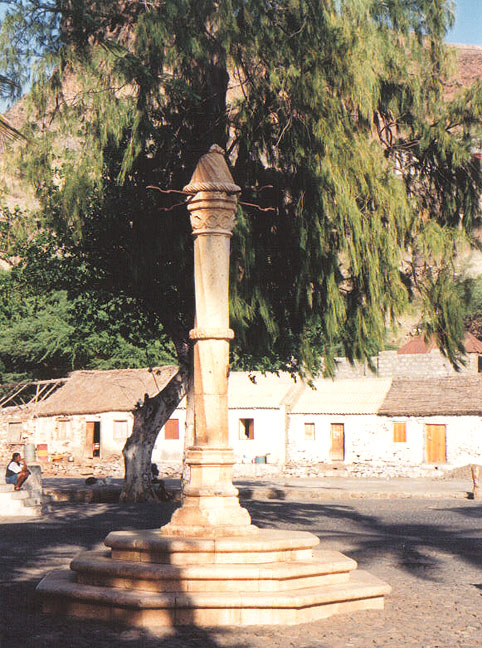 This is the Pelourinho (pillory), where they used to gather the slaves, in the town's main square. 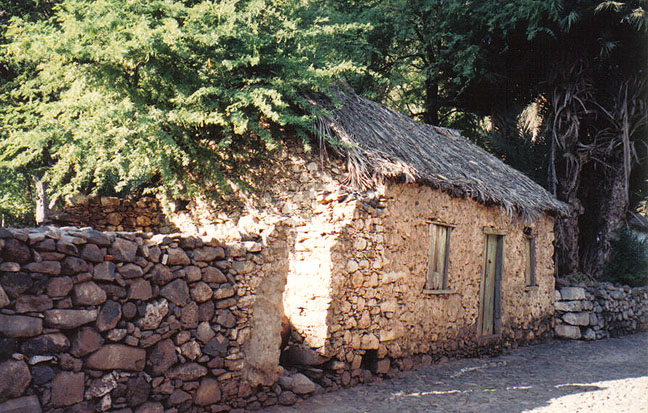 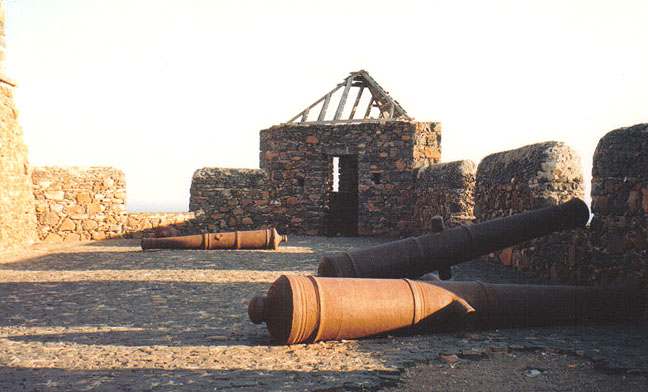 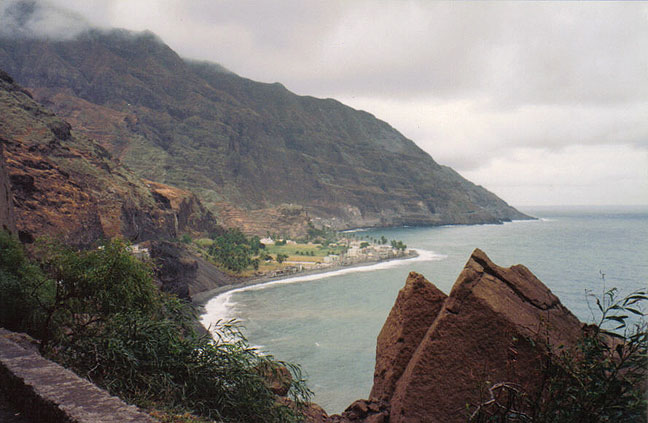 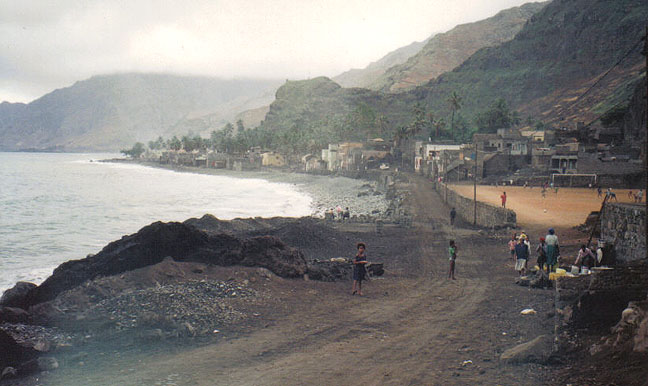 Pombas, or Vila das Pombas ("town of the doves") is a village in the Northeast of Santo Antão, on the wet shore.
The landscape of Santo Antão is the most spectacular of all the Cape Verde Islands. A stunning, extensive mountain range divides the island into two sections, one to the north and the other to the south. The north (as well as the higher mountains) is humid, while the south is dry like the neighbor São Vicente Island. The altitude reaches 1,979 metres in Tope de Coroa. 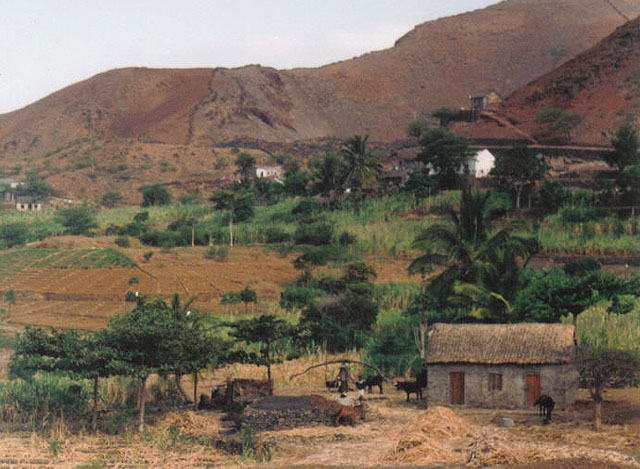 Francisco Santos' mother-in-law was born in São Vicente Island,
but her father came from this place in Santo Antão (she has also "da Cruz" in her name, has well as his wife);
her mother was born in São NIcolau Island. 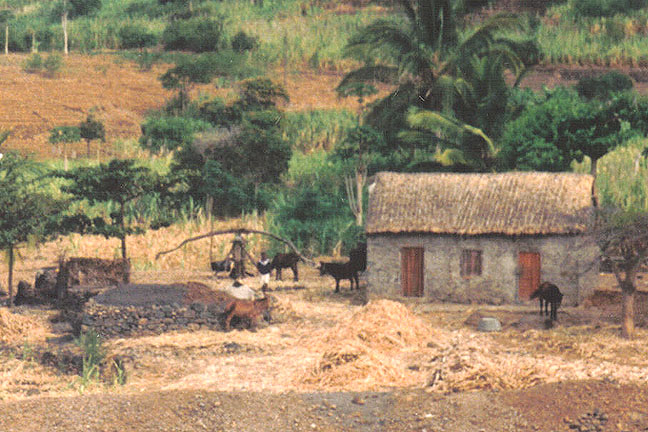 In this  detail you see the "trapiche". Moved by the force of animals (bulls, horses, etc),
the trapiche is the "device" (a mill, in English) to get the juice of the sugar cane.
With that they make the famous Santo Antão's grog or aguardente (rhum)

Ilhéu dos Pássaros ("islet of the birds"), called in Creole as Djéu.
This islet has only one lighthouse. It is at the entrance of the Porto Grande, São Vicente Island.
This photo was taken at sunset on board of the ferry from Santo Antão Island to São Vicente Island.