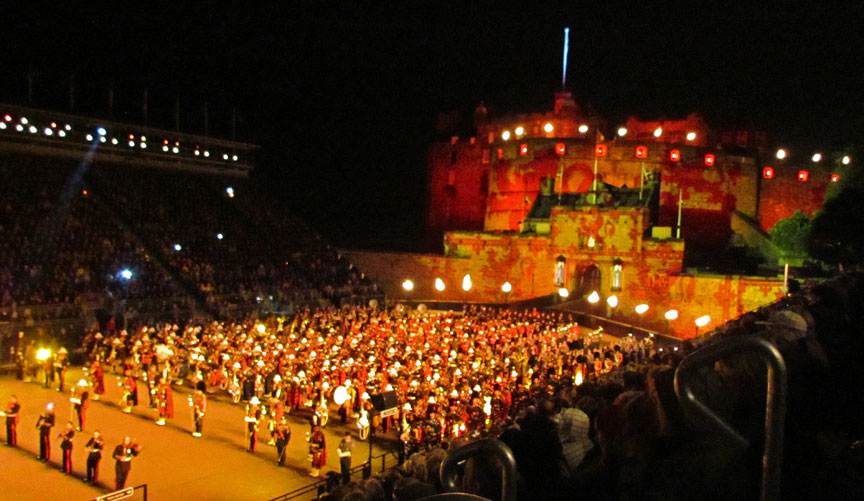 The Royal Edinburgh Military Tattoo is an annual series of Military tattoos performed by British Armed Forces, Commonwealth and International military bands and display teams in the Scottish capital Edinburgh. The event takes place annually throughout August, as part of the wider Edinburgh Festival (a collective name for many independent festivals and events in Edinburgh in August). 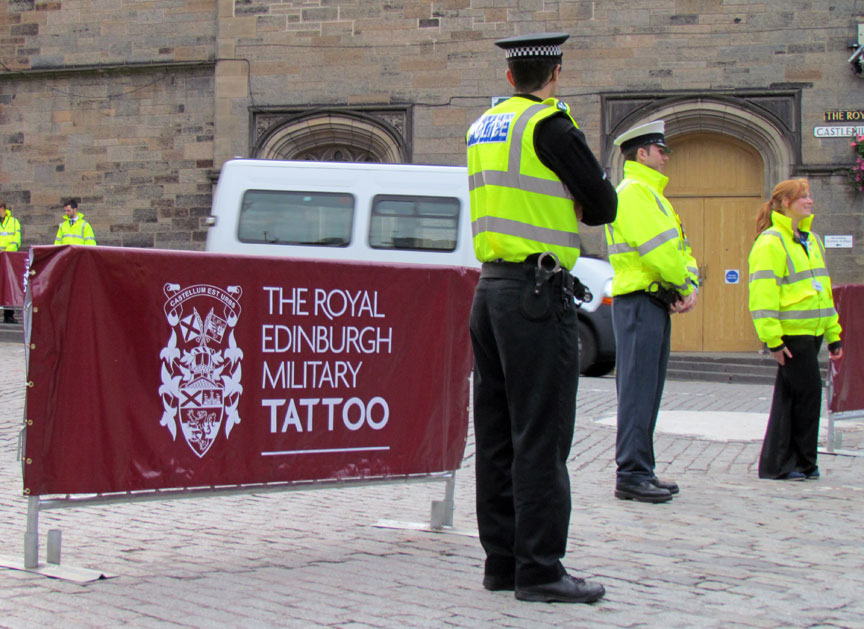 The word "Tattoo" is derived from "Doe den tap toe", or just "tap toe" ("toe" is pronounced "too"), the Dutch for "Last orders". Translated literally, it means: "put the tap to", or "close or turn off the tap". The term "Tap-toe" was first encountered by the British Army when stationed in Flanders during the War of the Austrian Succession. 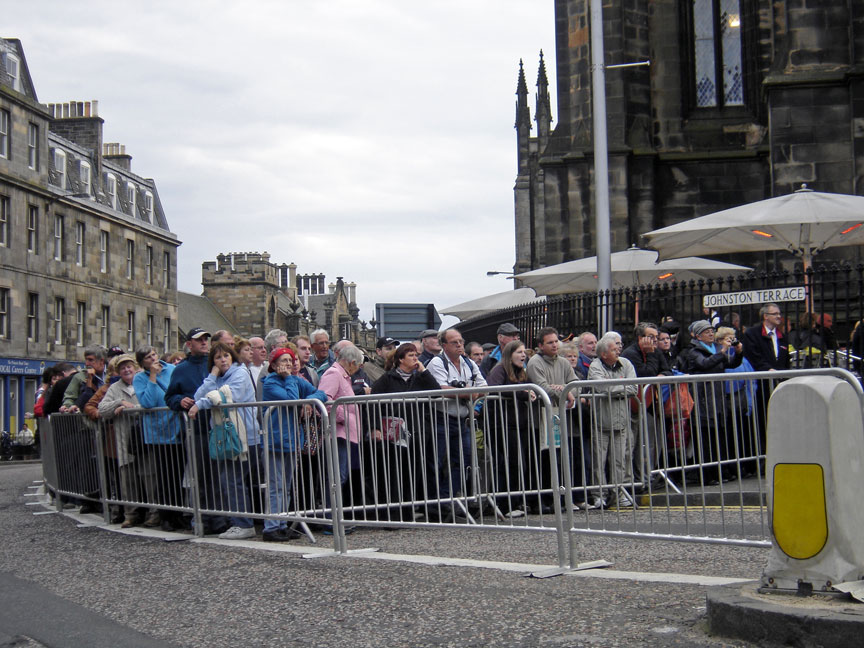 the queue of those waiting to enter

The British adopted the practice and it became a signal, played by a regiment's Corps of Drums or Pipes and Drums each night to tavern owners to turn off the taps of their ale kegs so that the soldiers would retire to their billeted lodgings at a reasonable hour. With the establishment of modern barracks and full Military bands later in the 18th century, the term Tattoo was used to describe not only the last duty call of the day, but also a ceremonial form of evening entertainment performed by Military musicians. 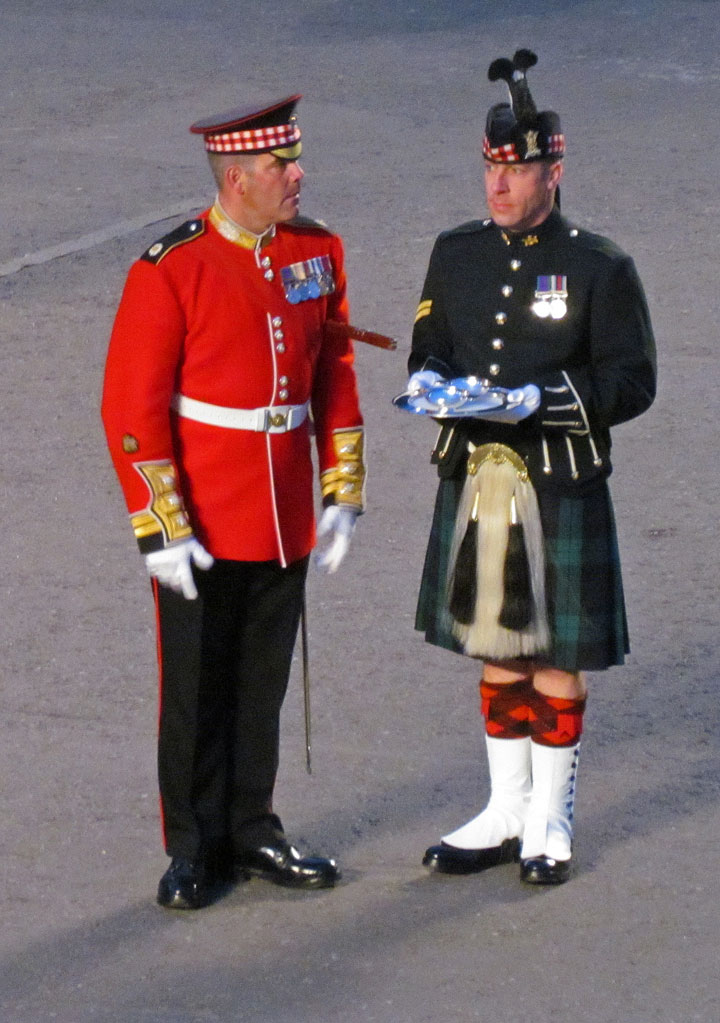 Although the first Tattoo in Edinburgh, entitled "Something About a Soldier", took place at the Ross Bandstand at Princes Street Gardens in 1949, the first official Edinburgh Military Tattoo began in 1950 with just eight items in the program. It drew some 6000 spectators seated in simple bench and scaffold structures around the north, south and east sides of the Edinburgh Castle esplanade. In 1952, the capacity of the stands was increased to accommodate a nightly audience of 7700, allowing 160,000 to watch live performances each year. 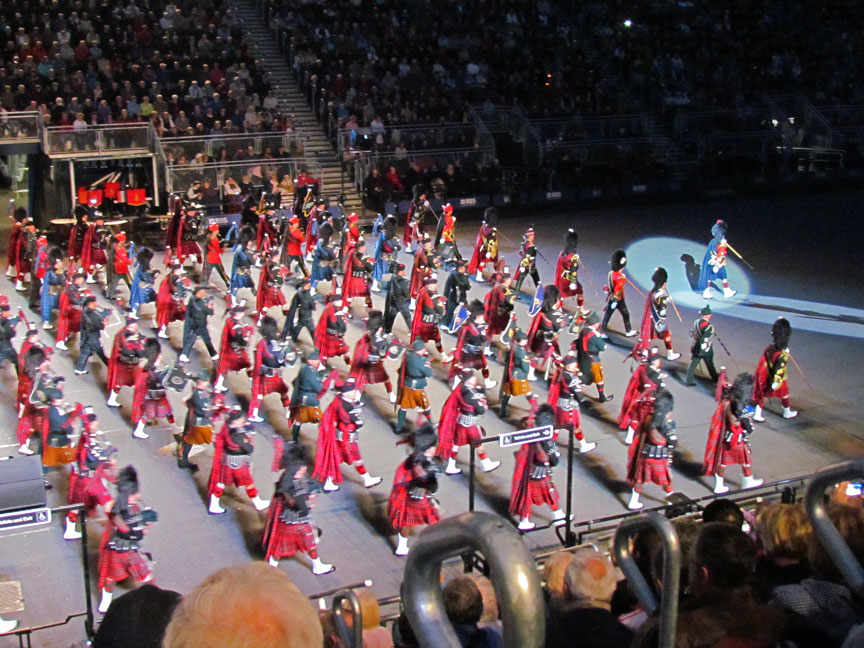 Now, on average, just over 217,000 people see the Tattoo live on the esplanade of Edinburgh Castle each year, and it has sold out in advance for the last decade. 30% of the audience are from Scotland and 35% from the rest of the United Kingdom. The remaining 35% of the audience consists of 70,000 visitors from overseas. Only the Edinburgh Festival Fringe is a bigger part of the Edinburgh Festival, although that consists of over 2000 productions staged across 247 venues. 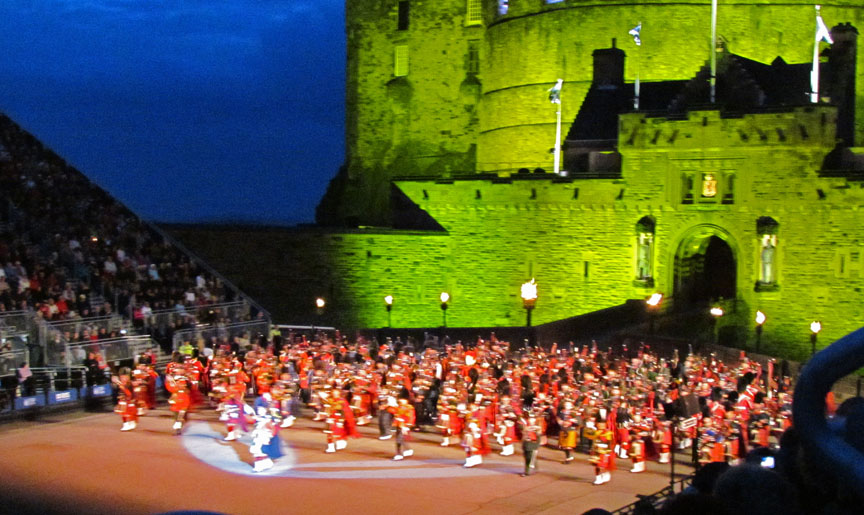 The current temporary Grandstands on the castle esplanade were first used in 1975 and have a capacity of 8600. New £16 million spectator stands and corporate hospitality boxes are in place by 2011. The new temporary stands will reduce the time taken to erect and dismantle them to one month, compared to the former six months, allowing the esplanade to host events at other times of the year. 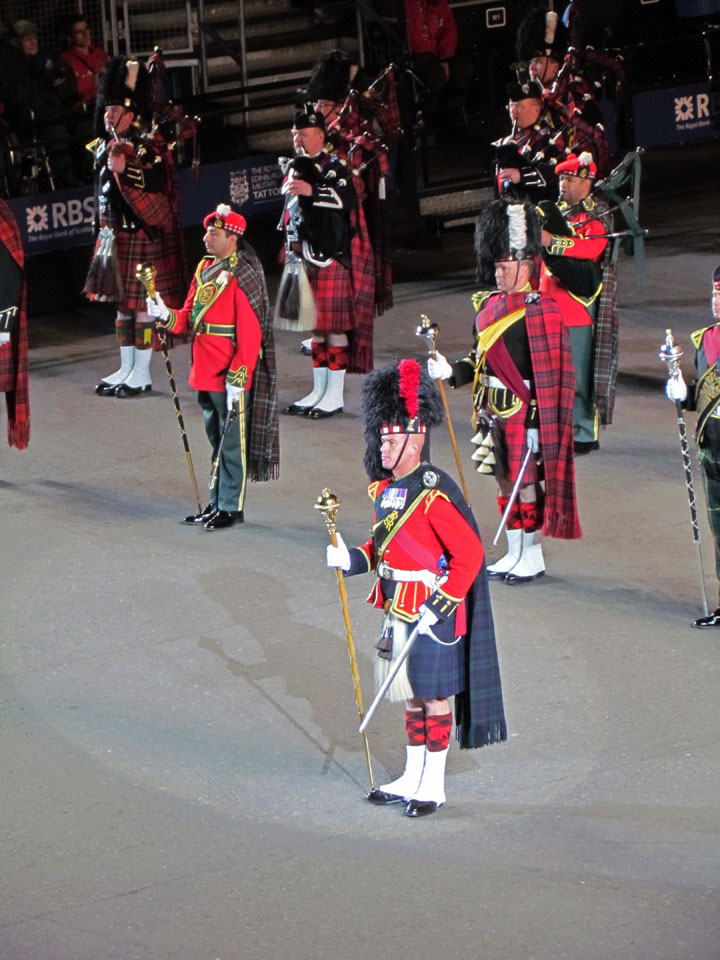 The Tattoo is performed every weekday evening and twice on Saturdays throughout August and has never been cancelled due to inclement weather. The second Saturday night performance includes a Fireworks display, although each performance uses Pyrotechnics and since 2005 has also incorporated a Son et lumière element projected onto the façade of the Castle. 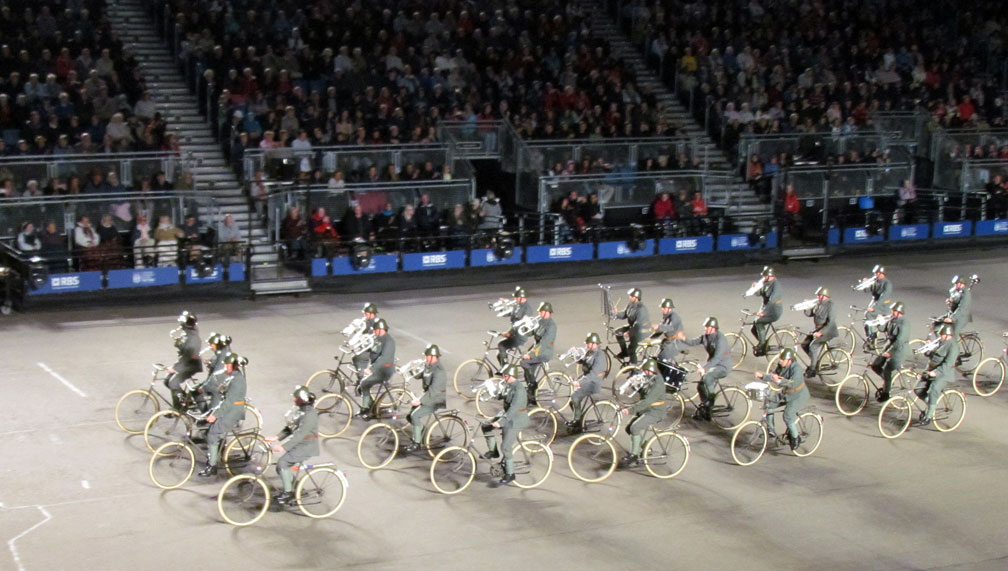 a Netherlands band on bicycles

The Tattoo is televised in 30 countries and a further 100 million people see the event on television worldwide. In the UK the event is broadcast annually by the BBC, with commentary since the 2009 broadcast provided by BBC Radio Scotland presenter Iain Anderson. The late Tom Fleming previously commentated, not missing a year between 1966 and 2008. In Australia the Tattoo is traditionally telecast by ABC on the evening of New Year's Day, although in a break with tradition, the 2006 Tattoo was broadcast two days earlier on 30 December, the 2007 Tattoo was broadcast even earlier on Christmas Eve, and the 2009 Tattoo was broadcast two days after New Year's Eve on 2 January 2010.

The Tattoo is run for charitable causes and over the years has given over £5 million to military and civilian charities and organizations, such as the Army Benevolent Fund. However, the greater benefit has been that it, by independent count, generates an additional £88 million in revenue for Edinburgh's economy annually. 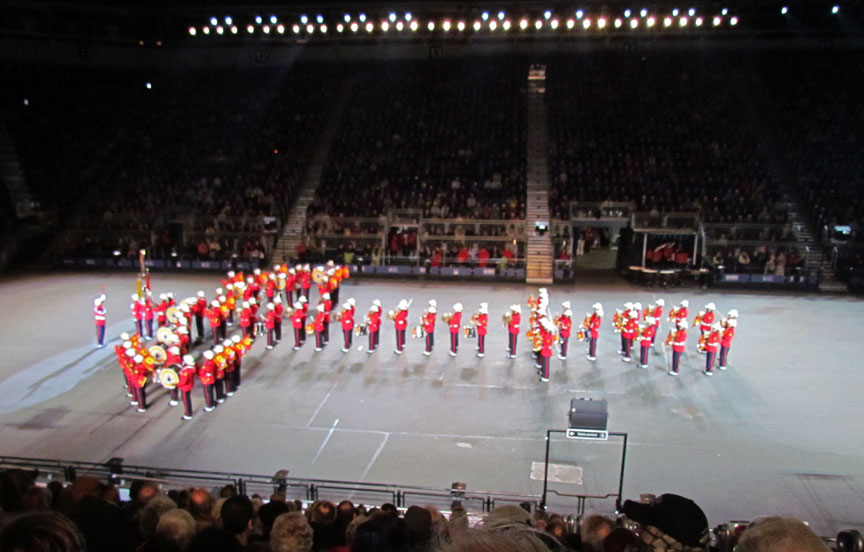 Princess Anne, the Princess Royal, is the current Patron of the event, with the main corporate sponsor being the Royal Bank of Scotland. 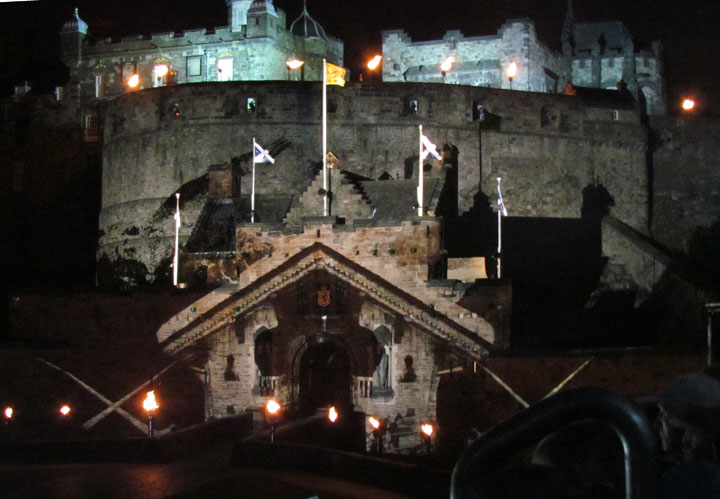 a Bavarian theme projected on the Edinburgh Castle

Since 2010, its 60th year, it is now called the Royal Edinburgh Military Tattoo due to HM Queen Elizabeth's awarding of the Royal title in celebration of six decades of this tattoo, one of the world's popular and much awaited military events, as well as Scotland's and Edinburgh's proudest activity in honor of the Scottish personnel and officers of the British Armed Forces and their contribution to the UK's military prestige through the centuries. 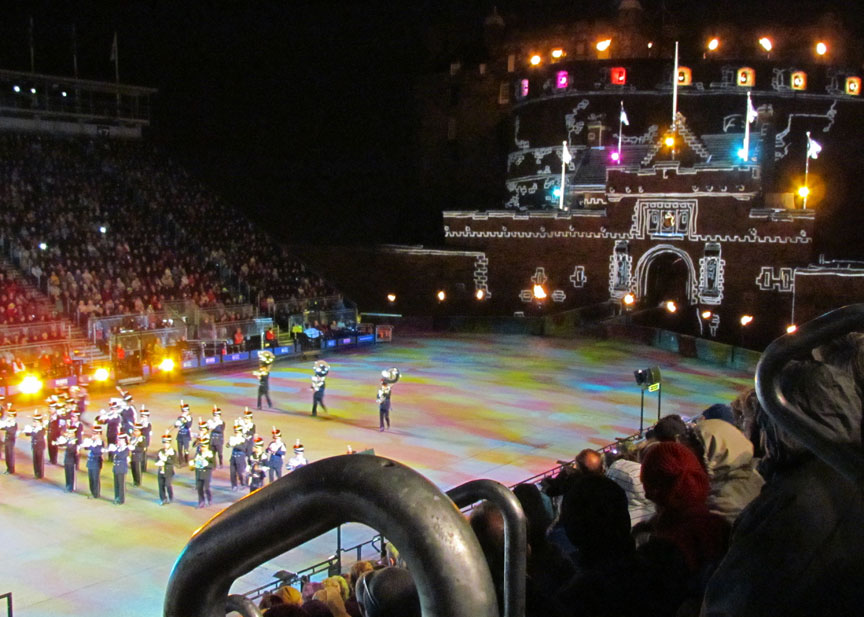 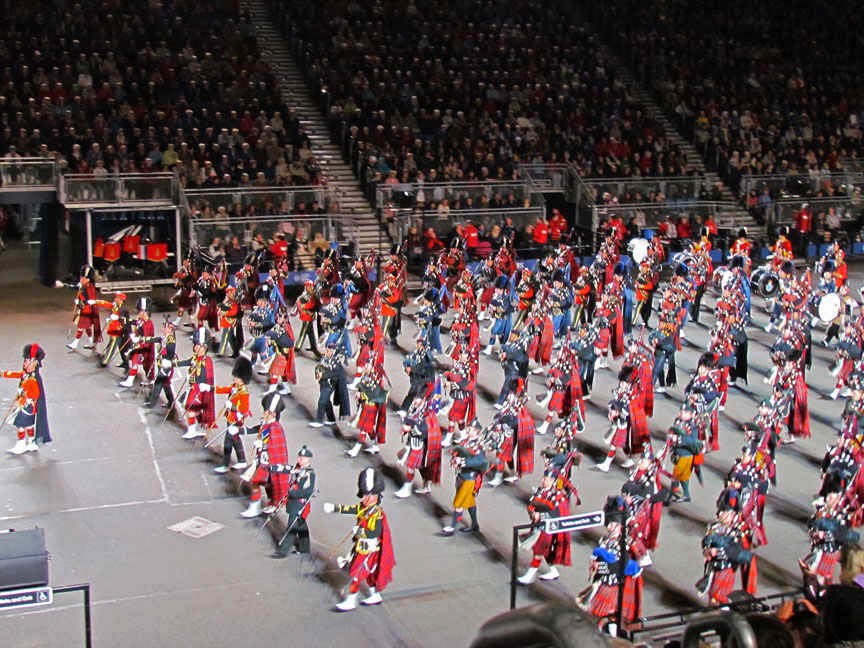